There are three churches in the Poppletons.

The oldest is St Everilda’s in Nether Poppleton. Church services there are usually on Sunday morning at 8.30 and Wednesdays at 10.00. Both services are normally Eucharistic services. At present there is no vicar but the church office is open should you require the services of the church for marriages, baptisms and funerals.

All Saints Church, Upper Poppleton on the Green is also a Church of England establishment and has been on the original site since the 11 century but the building was replaced in the 19 century with a more modern and functional church.  Services on Sundays are normally at 10am with evensong alternating between the two churches on the first Sunday

of each month.  At present there is no vicar but the church office is open should you require the services of  the church for marriages, baptisms and funerals.

The Methodist Church is in Upper Poppleton with a prominent position on the Green.

On 13 July 1757 John Wesley preached to a crowd of villagers on the village green at Upper Poppleton.  They flocked to hear him that evening and although, as he said, it was “violently hot”, they listed eagerly.  That night he wrote in his diary. ” Preached at Poppleton where the poor gladly received the Gospel.  The rich heard it and even seemed to approve. God give them to understand and practise it” 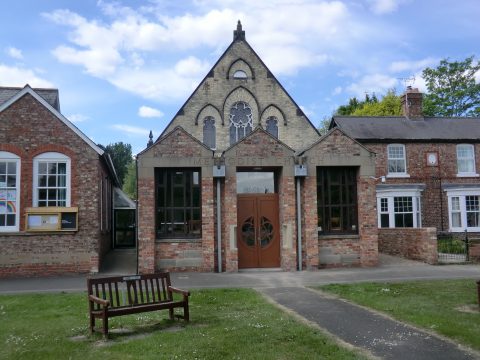 His prayers were answered when two farmer became trustees of a new chapel in York and a Methodist group was formed in Poppleton.  Initially meeting for services in a barn eventually in 1817 they built a chapel which looked a bit like a Doll’s house with a front door between two windows.  In 1889 a bigger chapel was built beside it and in the early 20th century the original chapel was demolished to make room for a Sunday School: this is now used for meetings.  Further expansions of the buildings were introduced in the 1970s and 1980s. In 2020 a new entrance was created to allow for those who are in wheelchairs and find steps difficult to access from street level.  For service information please use the following address.  http://www.poppletonmethodistchurch.org.uk/

There are no upcoming events at this time.